Obstacle detection system needs multiple functions to detect an obstacle and escape a collision. When we develop the system, it is very important to decide that the system should have what kind of function and how performance the functions should satisfy.
In this article, I'm introducing how to consider functions and performance the obstacle detection system should satisfy.

I read the following book as a reference. This book has good exlanations about techniques of perception with LiDAR, RADAR and Camera. 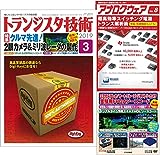 There are two ways of escaping a collision with an obstacle as follow.

An important information when the car escape an obstacle by taking a detour is "How is a colliding object blocking a road?" Especially, It is important to recognize where a lateral boundary of the object is.
The follwing figures are two patterns of escaping. On the left figure, an obstacle does not occupancy much on the road area, so the car can change the moving direction and escape the obstacle. On the other hand, the area where the obstacle occupancies is very large on the right figure. There is not enough to escape the obstacle, so the car should stop driving before colliding with the obstacle. 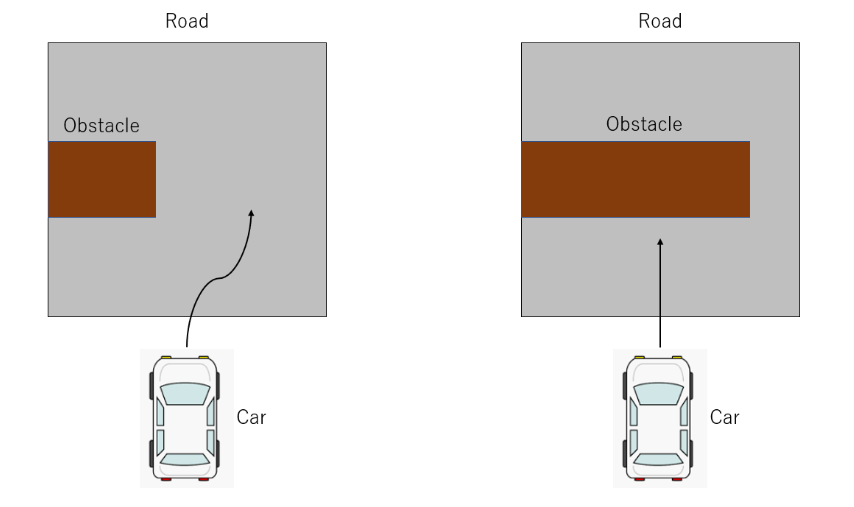 If the obstacle was sensed as an image data by a camera, the position of lateral boundary can be recognized easily like the following figure because the image data has a high resolution on the lateral direction. 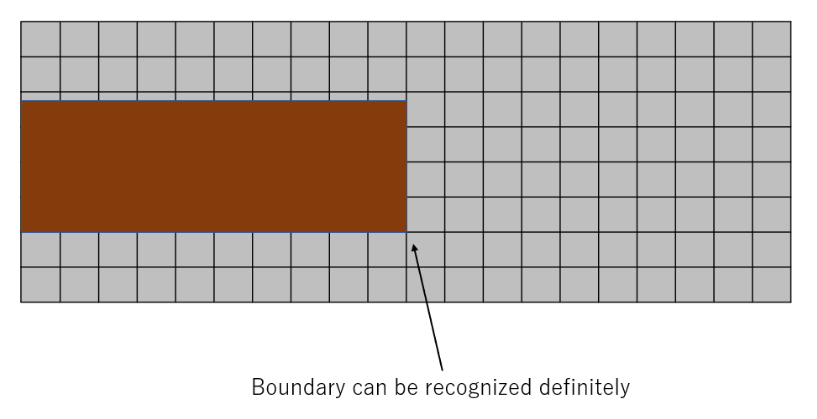 On the other hand, if the obstacle was detected by a sensor which has a low lateral resolution like a LiDAR, the position of lateral boundary can not be recognized as follow. 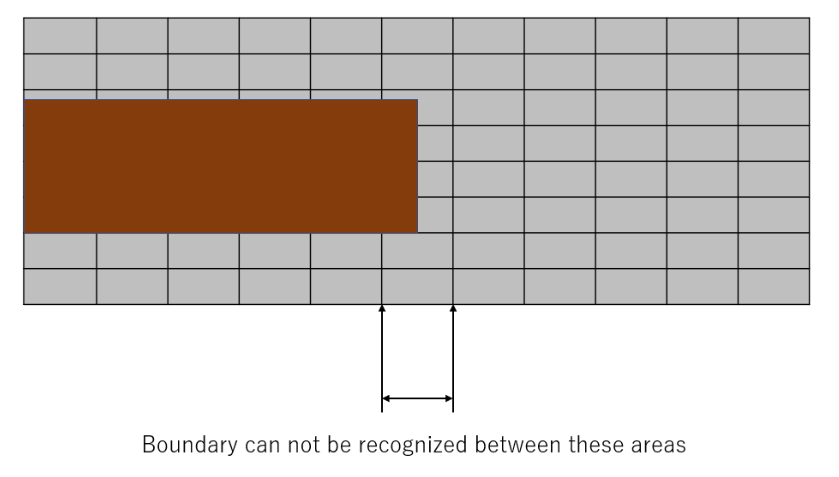 Detecting an obstacle in a short term

Case of running out into road

We assumed that the car was driving at 36km/h(10m/s) and a pedestrian ran out into the road at 3.6km/h(1m/s). In this case, how far will the car move for until stopping by sudden brake?

How to calculate a braking distance

This distance is from a point where a driver decided braking to a point where the brake started working. This is calculated by the following equation.
Free running distance = Reaction time[s] × Initial velocity[m/s]

is coefficient of friction between a tire and ground.

How to decide reaction performance

Braking force of sudden brake by human is 70% of gravitational acceleration. 9.8m/s is expressed as

The velocity of car is 10m/s and it takes 0.37 sec to move until 3.7m. The detection process need to be executed during 0.37 sec. In this situation, a relative velocity is used for judging the possibility of collision. The relative velocity can be calculated as follow figure. 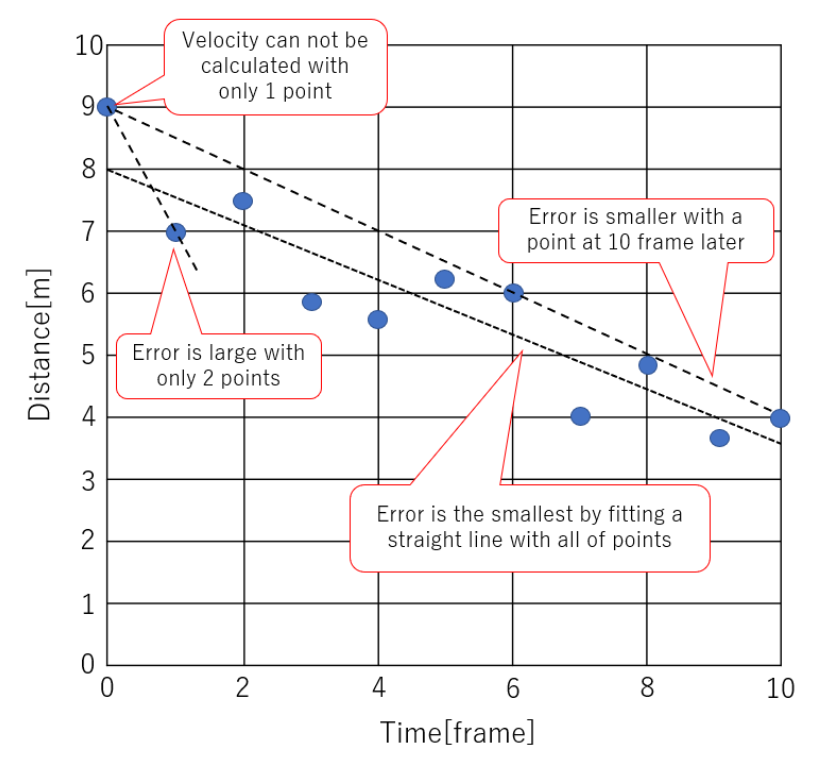 The system can get an accurate relative velocity data by using more than 2 sequential range data. If 10 frames data was observed during short time, the calculated relative velocity would be very accurate like the following figure. 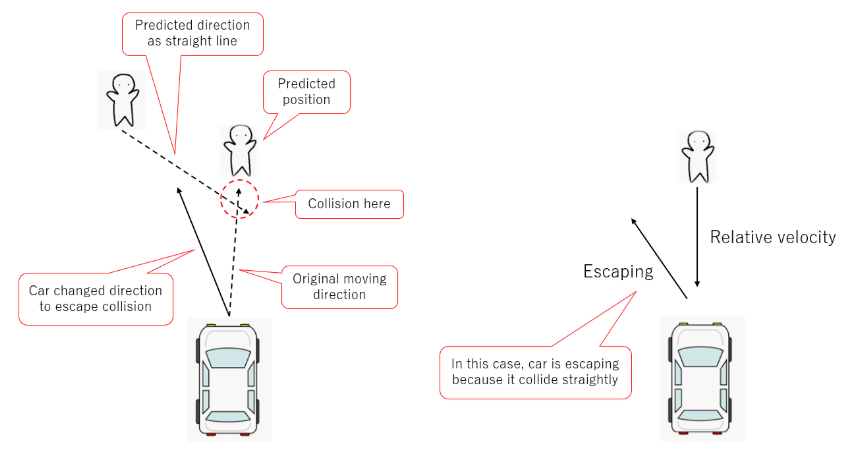 Judging the object is obstacle or not 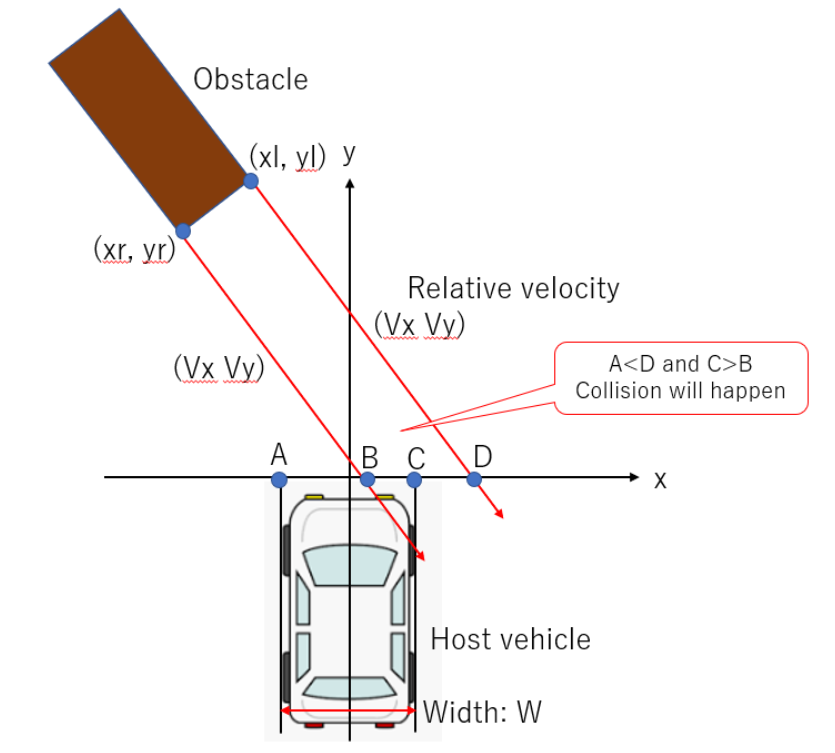 When a relative angle of the other object:

and a relative angle:

are same, the host vehicle collides with the other obejct. In fact, they have a width of their body. Even if it was not head-on collision, they would collide each other when they overlapped.
On the other hand, when the following condition was satisfied, they will not collide each other.